New Delhi, August 7 (News Wallet) Hindu Struggle Committee (HSC) expresses its concern over such incidents and expresses its condolence and urges the Government of India to show its strong resistance in the cases of Hindu atrocities and pressurize the Bangladesh government to stop killing Hindus in Bangladesh.

They alleged that ethnic cleaning and genocide of Hindus is going on in the Indian subcontinent.

“We saw that a batch of thirty Sikhs from Afghanistan have come back to Delhi, now there are only one hundred and ten Sikhs left and Hindu society was completely massacred from there. The 110 Sikhs remaining, there are also waiting to get visa from the Indian government, after that they too will migrate from there,” it said.

The HSC said that the same situation was going to happen to Bangladeshi Hindus. It said that in the next two decades, the existence of Hindus will be erased from there.

“Atrocities on minorities in many parts of Bangladesh are not going to stop. The latest case is from Narail district, where the mob also attacked and ransacked several houses belonging to the minority Hindu community,” it said.

It said that blasphemy is a very common excuse there these days to do a planned attack against the Hindus.
“There have been continuous attacks against the minority Hindu community in Bangladesh for the past several months. However, with the birth of Bangladesh in the year 1971, a series of atrocities started against the
Hindu community. The census was conducted in 1974 after the creation of Bangladesh. According to this census report, there were 13.50% Hindus in the country in 1974, but in the year 2011, only 8.20% Hindus remained in the country. Now the sword of genocide hangs on the remaining Hindus too,” it said.

The Hindu Struggle Committee expresses its concern over such incidents and expresses its condolence and urges the Government of India to show its strong resistance in the cases of Hindu atrocities. 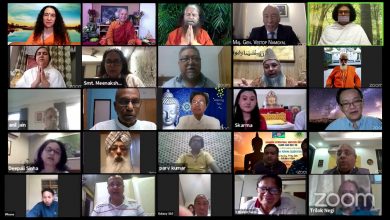 Blessed is the birth of the Buddhas