New Delhi: Delhi BJP President Shri Manoj Tiwari was congratulated by the workers from all over Delhi on the successful completion of 3 years as State President of Bharatiya Janata Party. He thanked for the unprecedented love and affection he received from the activists and the people of Delhi. Shri Manoj Tiwari arrived at the function organized to commemorate the birthday of former MP and BJP leader Shri Lal Bihari Tiwari and wished him a long life, then went to the Gaushala in Mayur Vihar and done cow worship. On this occasion, State Co-incharge of Media Department Shri Neelkant Bakshi, District President Shri Ajay Mahawar, State President of Purvanchal Morcha Shri Manish Singh, Chairman of Education Committee Rajkumar Ballan, Municipal Councilor Smt. Durgesh Tiwari including several party officials and large number of workers were present.

Shri Manoj Tiwari said that 3 years before from now when I received the responsibility of the State President on the instructions of the High Command, there was only one oath in mind, to liberate Delhi from every pain and to establish Antyodaya by giving the people of Delhi a transparent system and today we are very close to that goal with the hard work and support of the workers. The Bharatiya Janata Party strengthened the leadership of Delhi with the support and tireless work of the Karyakartas, as a result of which the BJP set a record of unprecedented success in the Municipal Corporation of Delhi and the Lok Sabha Elections 2019 but the target is still remaining and more than 2 crore people of Delhi expects the end of 22 years of exile of the Bharatiya Janata Party.

Shri Manoj Tiwari said that the Narendra Modi government of the Center, which is realizing the dreams of Pandit Deendayal Upadhyay ji is working for the development of everyone by taking the principle of Antyodaya to the people. To speed up the development of the country many schemes for education, health and employment and their benefits are reaching the people but millions of people are still deprived of many important schemes. With the establishment of Antyodaya in the Center and Municipal Corporation, where the hope of proper development of all in Delhi has been raised, Aam Aadmi Party government and Kejriwal stand as a wall between the schemes and the people of Delhi and we have to break this wall standing in the barrier of development between Delhi and the country with the support of millions of BJP workers in 2020 and to make Antyodaya popular among the people of Delhi because it is our and the party’s goal to end every problem of Delhi and establish Antyodaya. 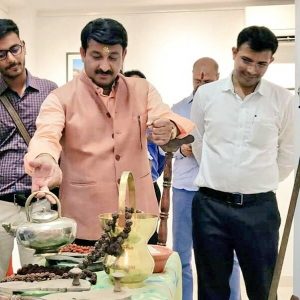