When the demonstrators blocked traffic and sat on the road, police, after repeated warnings and discussion with top officials, arrested Shri Subhash Chopra, former Delhi Ministers Shri Arvinder Singh Lovely and Shri Parvez Hashmi and chief spokesperson Shri Mukesh Sharma along with thousands of Congress workers, and taken them to the Mandir Marg police station and different other police stations in the Capital.

Chief spokesperson Shri Mukesh Sharma said that unauthorized colonies were a very important issue for the Congress party and the party will not allow the implementation of Section 7A in the notification to be applied while regularizing unauthorized colonies. He demanded that unauthorised colonies should be regularized without any pre-conditions, as was done by the Government of Smt. Indira Gandhi in 1976-77. He said that Congress will continue with its agitation till Section 7A is removed from the notification. He said that the Congress party will not only intensify its agitation, but will also create “chakka jams” across Delhi. He said that the DDA move to issue slips for Registry for ownership was big crime which was intended to collect bribes from the people. 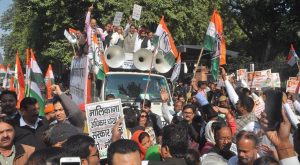