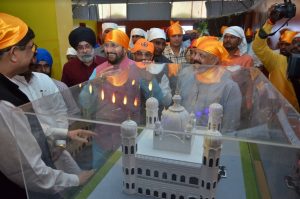 The Union Minister Shri Prakash Javadekar today inaugurated a ‘Multimedia Exhibition” organized at Nanded, on the occasion of the 550th birth anniversary of Shri Guru Nanak Dev Ji. The exhibition is being organized at the premises of Multipurpose High School, Vazirabad, Nanded.

After the inauguration, Mr. Javadekar offered tributes to Shri Guru Nanak Dev Ji through the LED screen and took Darshan of Gurudwaras of Kartarpur Sahib and Nankana Sahib through the digital medium. He also took information about the ‘Shabad’ and ‘Four Udaasi” through the LED screen. The light-and-sound show based on the life of Shri Guru Nanak Dev Ji and the mantras chanted by school students at the beginning of the main event won the hearts of all.

Director General (West Zone), Ministry of Information Broadcasting, Shri R. N. Mishra addressed the gathering and gave information about the multimedia exhibition. The exhibition depicting the life and work of Shri Guru Nanak Dev Ji will be open from 11 AM to 8.30 PM till November 18, 2019. The exhibition provides information about Shri Guru Nanak Dev Ji through Virtual Reality and wireless headphones. Such an exhibition is being held for the first time in the city of Nanded. With the help of technology, the Gurudwaras of Kartarpur Saheb and Nankana Sahib can be seen in this exhibition.

In another event, the Union Minister took Darshan of Guru Granth Sahib at Takhat Sachkhand Sri Hazur Abchal Nagar Sahib. Shri Javadekar was felicitated in the traditional manner, by giving him Kesari Chola, turban and headband.

After the visit of Shri Guru Granth Sahib, Shri Javdekar also served at Langar. The Union Minister also planted a sapling on this occasion. A total of 550 saplings would be planted in Nanded to mark the 550th birth anniversary of Shri Guru Nanak Dev Ji.