Talking to the media persons, Delhi BJP President Shri Manoj Tiwari said that the Hon’ble Supreme Court has dismissed all the petitions filed against its earlier judgment in the Rafale case. The court rejected the demand that there is need to file FIR in the Rs. 58000 crore of Rafale deal. The court also warned the former Congress President Rahul Gandhi that he should be careful in future before making such comments. The observation of the court clearly shows that how the Congress Party hatched conspiracy to malign the image of Prime Minister Shri Narender Modi. Today, there is a great acrimony among the people who have assembled here because by making irresponsible statements again and again against Prime Minister Shri Narender Modi, the Congress Party has tried to defame our Prime Minister. The insult to Prime Minister is the insult of every citizen and the Congress Party should apologize to the people of the country.

Former Union Minister Shri Vijay Goel said that the Congress Party has always been insulting Prime Minister Shri Narender Modi. Rahul Gandhi should rethink about his statements and speeches because every statement issued by him is given a wide coverage in the media of Pakistan. The character of Congress Party and the Aam Aadmi Party are similar. Rahul Gandhi and Chief Minister Kejriwal have used objectionable words against Modi ji many times for which Rahul Gandhi and Kejriwal should apologize. Prime Minister is doing welfare works including construction of toilets, free gas connections, inclusion of the weaker sections in the economic system of the country and taken other historic decision in the interest of the country. In this situation the insult of Prime Minister is the insult of every citizen of the country. 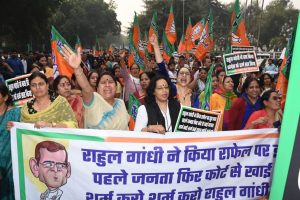 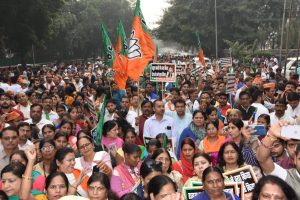 ‘Rozgar Do” is the only demand of India’s youth: Srinivas BV

We are working for the noble cause : Yaspal Bansal