Addressing the demonstrators outside Varunalaya, National secretary & Delhi Co in-charge Shri Tarun Chugh said that the people of Delhi are craving for pure drinking water and clean air but the government responsible for it has become dumb. In place of admitting his mistakes Chief Minister Kejriwal is telling the media that the samples should be tested again, the report of Bureau of India Standards clearly states that the water supplied in Delhi is not worth drinking because it has become poisonous. The people of Delhi who are craving for drops of pure water will not forgive this Chief Minister who has left them at the mercy of God. It is the responsibility of the government to provide basic amenities to the citizens but the Delhi government has failed in it. In this situation the CM of Delhi should apologize to the people and resign immediately.

being misused for party politics. If this money could have been used to clean water and air then such situation may not have arisen. This is the first CM in the history of Delhi who is directly playing with the health of the people of Delhi. 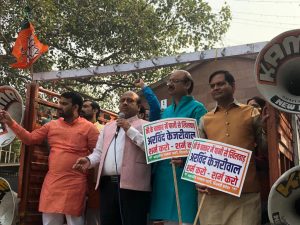