New Delhi: BJP Delhi Pradesh President Shri Manoj Tiwari has written a letter to the Chief Minister Arvind Kejriwal challenging him to collect water samples supplied by DJB alongwith him and get it tested in any laboratory. He said that Dinesh Mohaniya is the Vice President of DJB and water tankers are being openly sold from 500 to 1000 rupees in his area Sangam Vihar. This should also be investigated.

In his letter Delhi BJP President Shri Manoj Tiwari said that the chief Minister must have seen the report of B.I.S in which it has been said that water being supplied in Delhi is not worth drinking and has become poisonous due to which people are scared. People are afraid of drinking water supplied by DJB. Many people of Delhi have met me and told their problems and said that they are worried about their family members, particularly children. Under RTI it has been revealed that during the last four years, 21 lakh people have suffered due to water borne diseases. People from various areas of Delhi say that when they open their taps they get dirty water which seems to be mixed with sewer water. Such water is being supplied by DJB.

Shri Tiwari said that Kejriwal ji you are the Chief Minister of Delhi but one of your party leaders has said that CM is very much scared because people of Delhi have been cheated by your party and are going to vote against Aam Aadmi Party in the Assembly Elections. Chief Minister, you may do any kind of politics but do not play with the life of innocent children. Polluted water is being supplied in the name of free water but the Delhi government is claiming to supply potable water to the people. A team under the Union Food Minister Shri Ram Vilas Paswan is ready to take water samples in entire Delhi. As MP of north east Delhi I will join his team to collect water samples. I request the Chief Minister to send some officers with us to collect water samples. Member of the media will also accompany us and if you join then you are welcome.

Shri Tiwari requested the Chief Minister to intimate the time and date when we shall collect water samples from entire Delhi. For the purpose of testing water quality and transparency we shall get the samples tested by two or three experts so that no one doubts the results. 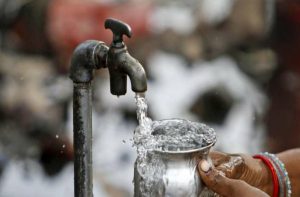