Lucknow: In the wake of International Children’s Day, Uttar Pradesh Metro Rail Corporation along with UNICEF (United Nations International Children’s Emergency Fund) ran a campaign at metro stations in the city. Culminating today, the week-long drive supported the issue of child rights protection with special emphasis on helping them meet their basic needs and expand opportunities for complete development of their talent.

Earlier this week it was launched at Hazratganj Metro Station to mark the 30th anniversary of the ‘Convention on the Rights of the Child’. As a part of the campaign five metro stations of LMRC including the Hazratganj Metro Station took the blue hue with decorative lightings. Photo booths were installed at all the metro stations, volunteers posted at these photo booths encouraged visitors to click their pictures and support the cause. They informed the visitors about the need and purpose of the campaign. Around 6000s number of metro commuters supported the cause and got their pictures clicked at the photo booths.

Ruth Lyons, UNICEF, Uttar Pradesh Chief of Feed Office and Dr. Kumar Keshav, MD UPMRCL who were present at the inaugural expressed their happiness at the successful completion of the campaign. Ruth thanked the Lucknow Metro for joining the Children’s Campaign and thanked the staff posted at five selected metro stations for joining the campaign #GoBlue. He told that many organizations of the world do blue lighting on 20 November to show their participation towards children’s rights. In India, Rashtrapati Bhavan, North, and South Block are among the prominent buildings that showed solidarity with children’s rights and collaborated in this global campaign.

Dr. Kumar Keshav, MD, UPMRCL said that “The safety of children is the top priority of UPMRC. Metro staffs pay special attention to children traveling by the metro. If it appears that a child is traveling without parents, we ensure to enquire who is with him – if the child is found alone then the action is taken immediately. LMRC will continue to prioritize issues related to children’s rights in the future. Artifacts were displayed in the program to create awareness about child rights”.

Apart from Hazratganj, four other metro stations that participated in the #GoBlue campaign were Bhootnath, Vishvavidyalaya, Charbagh, and Transport Nagar metro stations. 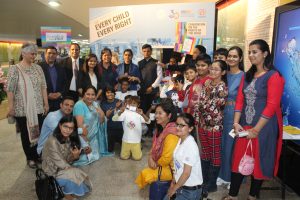