In the context of the strong observations made by the Supreme Court of India on the issue of air pollution and poisonous water being supplied to the people of Delhi, BJP Pradesh President Shri Manoj Tiwari has said that the Chief Minister of Delhi should take lesson from it because he is distributing diseases and death to the people of Delhi. A press conference was held on this issue at the BJP Pradesh Office in which Media Co-Incharge Shri Neelkant Bakshi and MLA Shri Manjinder Singh Sirsa were also present.

After learning about the strong observation by the Supreme Court on pollution and poisonous water in Delhi, Shri Manoj Tiwari became emotional and said that today the Supreme Court had to say that Delhi has become worse than hell. The Court pointed out to the Government that the life of the people of India is not as cheap as you think and you will have to pay for it. It would be better if you bring 15 bags of explosive and kill the people at once. BJP expects the Chief Minister of Delhi that good sense will prevail upon him after the strong observation of Supreme Court.

Shri Tiwari said that Chief Minister of Delhi Arvind Kejriwal is playing with the lives of the people of Delhi. A delegation of 21 representatives of BJP had gone to meet the Chief Minister on this issue but in place of talking to the delegation, Kejriwal got them attacked. As a responsible opposition party, BJP wants to work for solving the problems of Delhi in cooperation with Delhi Government but Kejriwal does not want to talk to the opposition on the problems of Delhi. Even in the case of Signature Bridge, we had gone there to stand with the Government but the opposition was insulted there. Chief Minister of Delhi Kejriwal has wasted 400 crores of public money for promoting himself. Had he spent even 50% of this amount on smoke towers and purchasing electric buses then the condition in Delhi could have been better. Kejriwal has wasted crores of rupees of public money which should be recovered from him. People of Delhi will not forgive him for this offence.

Shri Tiwari further said that Arvind Kejriwal has distributed 2600 Air Purifiers and ROs to the people close to him whereas the people of Delhi are suffering due to toxic air and polluted water. DJB has itself admitted that it has received 5000 complaints of water pollution but the Head of DJB Arvind Kejriwal has been suppressing the complaints about polluted water. When the Bureau of Indian Standards collected samples of water and reported to the Delhi Government about its poor quality then in place of taking appropriate action, Kejriwal started the politics of playing with the lives of the people. Shri Tiwari said that after coming to power in Delhi, BJP pledges to ensure pure air and water within two and half years. 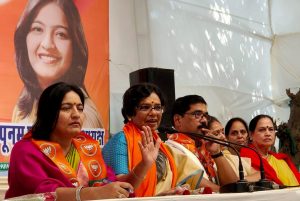