New Delhi:Exposing the odd-even scheme of Kejriwal Government in a press conference held at Delhi BJP Office today, former Delhi Pradesh President and Rajya Sabha MP Shri Vijay Goel said that the people of Delhi are badly suffering due to increasing pollution and becoming victim of it by contacting the diseases caused by pollution. But Kejriwal has completely failed in controlling pollution and terming this scheme as flop, the Supreme Court has said that 60% of pollution in Delhi is due to the negligence of Delhi Government during the last 5 years. NDMC Standing Committee Chairman Shri Jai Prakash and Pradesh Media Head Shri Ashok Goel Devraha were present on this occasion.

Addressing the media persons, Shri Vijay Goel said that the index of pollution is 505 in Delhi today which is dangerous level. The Supreme Court has also admitted that Kejriwal Government was playing drama by introducing odd and even scheme. He has misled the people of Delhi on the pretext of odd and even scheme. Kejriwal did nothing to control pollution during the last 5 years and hence he had to play such drama. Kejriwal also committed corruption in this scheme. Chief Minister Kejriwal will not dare to introduce odd-even again, If he does so the people of Delhi will strongly oppose it. The Supreme Court has also made it clear that Odd & Even is flop scheme and reprimanded Delhi Government. Stubble burning has been in practice for the last 30 years but we cannot hold only it responsible for pollution.

Shri Vijay Goel also said that the Odd & Even scheme of Delhi Government continued for 12 days out of which, three days were exempted from it. 48885 persons were chalaned for violating odd and even scheme which is just harassment of the people. Expressing its concern over the increasing pollution, the Supreme Court reprimanded Kejriwal Government and pointed out that odd-even scheme is not a proper solution for controlling pollution. Under this scheme, only the middle class has suffered because the rich people have more than one vehicle. Odd and Even scheme is also not a long term solution and until the public transport system is not improved, the pollution level will not come down in Delhi. This scheme was implemented fully but pollution level crossed the dangerous level. Court also observed that if 70% of the vehicles are exempted then there is no advantage of odd and even scheme. In foreign countries where such schemes are implemented, no vehicle gets exemption. 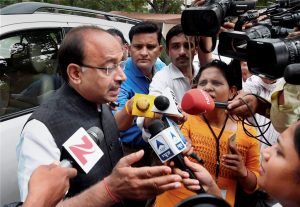 BJP Government at the Centre is enemy of Government employees—Congress.