New Delhi: Delhi Pradesh Congress Committee president Shri Subhash Chopra will bring out a postmortem report on the irregularities in the purchase of new AC buses for DTC, chaotic public transport system, and the severe levels of air pollution in the Capital. This was stated by senior leader and Chief Spokesperson Shri Mukesh Sharma at a press conference today. Lashing out at the Kejriwal Government for the non-clearance of the tender to purchase 1000 new AC buses by the DTC Board, to add to the depleted DTC fleet, theDelhi Pradesh Congress Committee alleged that the AAP Government was trying to indulge in a big scam in the purchase of these buses. The Pradesh Congress alleged that thrice before, tenders were floated for the purchase of new DTC buses, but due to corruption charges, the move was scuttled.

Shri Arvinder Singh Lovely said that the loud pronouncement by the Kejriwal Government regarding the purchase of new buses for DTC was for self publicity as the tender for the purchase of 2000 new buses was finalized when the Congress was in power in Delhi, and 300 buses were to be delivered in the first lot. He said that till now, even the first lot of these buses have not been delivered due to the inefficiency of the Kejriwal Government, which has been in power for the past five years. He said that the incompetence of the Kejriwal Government has become a topic of discussion, from the common people in Delhi to MPs in Parliament, but the AAP Government seems to be oblivious of what’s happening in the national Capital. He accused the BJP MPs from Delhi of not being serious about the discussion on Delhi in Parliament. Instead, the BJP MPs have made fun of the people of Delhi, Shri Lovely added.

Shri Lovely and Shri Azad said that the truth is that the tender for purchasing 1000 AC buses had been floated, but after that in October, a new tender was floated for the maintenance of 300 buses, for which the same two companies, who had participated in the initial tender, applied which proves that in a bid to indulge in corruption, the AAP Government was deliberately delaying the purchase of new buses for DTC. They expressed surprise that no clause for the maintenance of the new buses was included in the initial tender, and when the clause was added, it was only for 300 buses. The Delhi Congress leaders alleged that to indulge in big corruption, obstacles were being created for the purchase of new DTC buses. The Congress leaders said that the tender to buy 250 buses was cancelled because guarantee money was not deposited. They said that in the past five years, the Kejriwal Government had floated three tenders for the purchase of DCT buses, but none of the tenders was actualized. They said that on 6 September, tender was opened for the purchase of low floor CNG buses which is at a financial stage. In this tender too, only two companies participated.

Shri Lovely and Shri Azad said that when the Congress Government demitted power in Delhi in 2013, DTC had a daily ridership of 44.75 lakh passengers which has now come down to 20-25 lakh passengers per day. They said that the Kejriwal Government has not bought a single new bus in the last five years as there is a conflict in the policies and intent of the AAP Government. They said that 1845 DTC buses have vanished from the fleet, and supporting their charge with data, the Congress leaders said that at the end of 2013, there were 5445 buses in the DTC fleet, but according to an EPCA report in June 2019, the number has come down to 3600 buses. They said that due to the severe shortage of public transport in the Capital, air pollution in Delhi has gone up from PM 2.5 per cent to 41 per cent now.

Shri Kirti Azad alleged corruption in the hiring of 2000 private buses during the Odd-Even scheme, which should be probed. He said that on the one hand, due to the shortage of new buses, Delhiites are suffering from dangerous pollution levels and on the other hand, the Kejriwal Government was indulging in corruption in the purchase of new buses, As a result, he added, no new bus will be on the Delhi roads in the next 52 months. 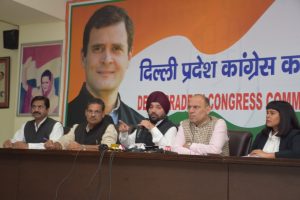