New Delhi: Delhi Pradesh Congress Committee president Shri Subhash Chopra accused the Modi Government at the Centre and the Kejriwal Government in Delhi for the soaring prices of onion in Delhi, as both these Governments were indulging in shadow boxing, by making charges and counter charges without taking effective steps to stem the price rise. Shri Chopra warned that if the Modi and Kejriwal Governments do not take prompt steps to bring down the prices of onions, then the Congress workers will gherao the residence of Union Food and Civil Supplies Minister Shri Ram Vilas Paswan. Shri Chopra recalled that Shri Paswan had expressed his inability to check the onion price rise.

Shri Subhash Chopra said that onion prices have gone beyond Rs 120 per kg in Delhi, and comparing the price of onion with dollar, he said that dollar was now cheaper than onion in the Capital. He said that the prices of onion and vegetables are rocketing in Delhi as the BJP and AAP Governments are in collusion with hoarders and black-marketers.

Shri Subhash Chopra expressed surprise that on the one hand, onions were rotting while on the other hand, common people were looking for onions being sold at subsidized rates, as claimed by Kejriwal. Shri Chopra recalled that in 1998 when the prices of onions hit the roof, the BJP Government had to wash its hands off, as it could not contain the shooting prices of onions. He warned that if onion prices had brought down the BJP Government then, history will repeat itself now when the onion price issue will bring down both the AAP and BJP Governments. Shri Chopra said that the people of Delhi are feeling let down by the Modi Government at the Centre and the Kejriwal Government in Delhi.

Senior leader and chief spokesperson Shri Mukesh Sharma said that neither the Central Government nor the Delhi Government were making any serious attempt to bring down the prices of onions. He said that both the BJP and AAP were only indulging political slugfest instead of bringing down the prices as both these parties are hands in glove with hoarders and black-marketers. He said that due to the shadow boxing between the BJP and AAP Governments, the people of Delhi have become the worst sufferers as onions and vegetables have gone out of their purchasing power. He demanded that the Central and AAP Governments should take prompt steps to make onion at cheaper rates to the people of Delhi. 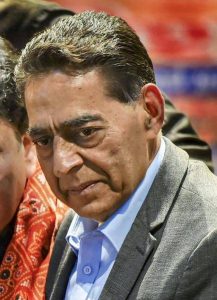