New Delhi: The 3rd National Convention of All India Kisan Sangharsh Coordination Committee (AIKSCC) which saw the participation of 800 delegates from 25 states, concluded on a high today afternoon at the Mavalankar Hall, Constitution Club, New Delhi. The Convention had all members of the National Working Group speaking on various issues affecting the farmers and presenting resolutions on Forest Rights Act, on the implementation of LARR Act 2013 and against forced displacement of Tribals and Peasants, on Free Trade Agreements which allow massive dumping of agricultural produce and domination of MNCs in and control of the agriculture sector, Comprehensive Legislation for Rights of Agricultural Workers and Sharecroppers, against Corporate Loot of farmers, for Pension of Rs. 10,000 for all rural work force, on revamping Crop Insurance and disaster compensation, and on losses suffered by J&K farmers.

In addition to the working group members, leaders of more than 100 organizations from across India addressed the Convention about the issues and activities in their states and made suggestions for the action program of AIKSCC. The Farmers’ Charter of AIKSCC covering 21 issues was presented and discussed at the Convention.

The future program of AIKSCC was discussed and declared in the concluding session of the Convention. Subsequently, the leadership of AIKSCC consisting of the national Working Group members led by convenor VM Singh, addressed a Press Conference and announced the future program.

AIKSCC declared that the farmers of the nation will organize a nationwide Grameen Bharat Bandh on January 8 in protest against the anti-farmer policies and inaction of the Centre and the States on the demands of the farmers. The protest will highlight the government’s failure on various fronts – its failure in ensuring Minimum Support Prices at C2+50% for all crops, in providing freedom from indebtedness, in implementing effective crop insurance and disaster compensation in the face of drought, floods and unseasonal rains, in implementing Forest Rights Act, etc. – and on other burning issues at state level. 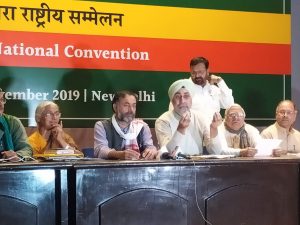