Addressing the protesters, State Media Head Shri Ashok Goel Devraha said that ever since the Aam Aadmi Party came to power in Delhi, till date the Chief Minister has not done a single thing for the public interest. Far from fulfilling the election promises, the situation today is that the air is also contaminated, drinking water is also contaminated and the Chief Minister tells the public that all standards are wrong and the water is absolutely clean. The Chief Minister should go among the people of Delhi and show them by drinking water, then you will know whether the water is contaminated or clean. The Chief Minister who drinks self-mineral water has nothing to do with the public’s pain. The Aam Aadmi Party, filled with inaction has cheated the people of Delhi and this public is now ready to give a proper answer to them. 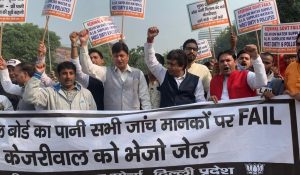