Addressing the participants, Union Minister Shri Prakash Javadekar said that Modi government made a historic decision to regularize unauthorized colonies. This decision has not been taken in view of the upcoming election rather decided to give justice to the people. Modi government has erased the blot of unauthorized from the heads of 40 lakh people living in unauthorized colonies since 40 years. The Central Government asked the AAP government to prepare the map of these colonies but they failed to do so even in 5 years and in 2019 they requested to extend the time up to 2021. After that the Central Government took the responsibility of this work and directed the DDA to prepare the map. Maps of 1000 colonies have already been prepared and 700 have been uploaded on the websites. The DDA has also opened 25 centres in which registration will be done after getting a filled up form. Our workers should inform the people about the registration and should help them to fill up forms. The Bill related to regularization has already been passed by both the houses and it will soon become law. Another important decision of our government is the announcement of ‘Jahan Jhuggi Wahin Makan’. Out of 192 JJ clusters of Delhi survey of 25 clusters has been completed and the work of survey of 167 colonies is in progress. About 15-20 lakh people live in these JJ clusters and they will be allotted pakka houses under the scheme ‘Jahan Jhuggi Wahin Makan’. Under the third decision of the Central Government, 10 lakh shops on lease hold basis have been given freehold status. In its fourth decision, the government has waived a conversion fee of more than 50 thousand shopkeepers of 105 markets. The fifth decision, the Modi government has provided relief to 5 Lakh household industries by allowing them to utilize 11 KV power in place of 5KV power and work with 9 employees in place of 5. Now these household industries will not need to get NOC from DPCC, Labour Department and Industries Department. Modi government has worked in the interest of the poor, middle-class, traders etc.

Shri Javadekar further said that Kejriwal government has always misled the people. Sometimes he has protected MLA accused of sexual violence and sometimes supported the Tukde-Tukde Gang shouting anti-national slogans and not given permission to prosecute them. On the issue of NRC, Shri Javadekar said that the Chief Minister of Delhi says that if NRC is implemented in Delhi then Manoj Tiwari will have to leave Delhi. NRC is for checking illegal infiltrators. Is Manoj Tiwari a foreign infiltrator? Delhi is heart of India and the capital city for all of us. Here the people from other states have contributed to its development and it would be a sin to say them as infiltrators. He said that people very well understand that this is the government of advertisements. A bad product can’t be sold by good advertisement.

Shri Javadekar said that workers should meet the people of every section and talk to them and tell them what work has been done by BJP and what are the failures of AAP government. BJP workers should also ensure that the benefits of the schemes should reach unto the last because BJP is committed to the development of every person. Now the people know the reality and will give a befitting reply in the upcoming assembly. I have talked to many people in Delhi and all of them have said that this time Delhi has decided to vote for BJP and form BJP government in Delhi.

Addressing the meeting Delhi BJP Pradesh President Shri Manoj Tiwari said that the victory of BJP in assembly elections depends on the workers. Since BJP is not been in power in Delhi, the condition of Delhi has become from bad to worse. Air and water have become poisonous, roads are full of potholes but Kejriwal government says that Modi Ji did not allow them to work in Delhi. The hospitals of Delhi are themselves on ventilators, many of them are on the verge of being closed but Kejriwal government is issuing false advertisements to mislead the people. Infiltrators are involved in the cases of snatching on the roads of Delhi, attack the passerby but Delhi government doesn’t take any action against them. When BJP talks about deporting them out of Delhi, AAP misleads the people of Poorvanchal by issuing provocative statements.

Shri Tiwari also said that Modi government framed POSCO Act and gave a strong message to the criminal elements. The rapist doesn’t have any religion or caste and we will have to think above these lines so that the victims get justice as soon as possible and BJP government is committed to it. How can we expect justice from Aam Admi Party which is protecting accused of sexual violence. This party compels its own worker to commit suicide but did not take any action against the accused MLA. By regularizing the unauthorized colonies Prime Minister Shri Narendra Modi has ended the fear of people of losing their houses. This work could have done by Kejriwal government in 5 years but it failed to do so. BJP has always been fighting for rights and justice to the people and will continue in the future also. 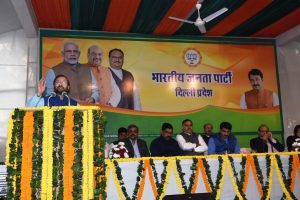