New Delhi: Holding the Modi Government responsible for the economic slump, unemployment and ruin of the businesses and industries on account of demonetization and increased GST rate, the Delhi Congress, under the leadership of Delhi Pradesh Congress Committee president Shri Subhash Chopra, intensified its Halla Bol programme when two Aakrosh Rallies and dharnas were held at the East Delhi and Chandni Chowk Parliamentary constituencies.

In the second phase of Halla Bol rally, Aakrosh rallies and dharnas were held at Krishna Nagar district in East Delhi and Adarsh Nagar district in Chandni Chowk Assembly constituencies in which a large number of Congress workers and local people participated to protest against the BJP Government at the Centre. The rallies were presided over by district presidents Gurcharan Singh Raju and Harikishan Jindal respectively.

Making strident criticism at the frequent foreign travels of Prime Minister Narendra Modi, when the country was caught in the grip of economic slump and unemployment, Shri Subhash Chopra said that new private investments have hit a 16-year low. He said that the Modi Government has totally failed on the economic front. Shri Chopra said that household savings are at a 20-year low, and India’s overall savings rate has declined to 30 per cent from 34.6% earlier. He said that the Modi Government has not given any attention to industrial development.

Shri Chopra, quoting relevant data, said that industrial growth shrank to 1.1 per cent in August, 2019—a seven-year low. He said that the manufacturing growth rate at -1.2% is the lowest since October, 2014, adding that the Core Sector Growth is the lowest in the last four years, due to the wrong policies of the Modi Government. Shri Chopra said that exports are in a free fall, as in August 2019, exports fell by 6.6 per cent. He said that 21 of 29 major commodities, which account for 66.4 per cent of the export bill, had recorded a year on year decline. He said that these declines show that the policies and programmes of the Modi Government have completely collapsed.

Shri Jai Prakash Agarwal, addressing the Aakrosh Rally at Adarsh Nagar district, alleged that the small and medium shopkeepers and industries in Delhi have come under tremendous pressure on account of demonetization and the high GST rates, As a result, more than half of these ventures are on the verge of shut down. He said that one of the main resons for the rising rate of unemployment in the Capital is due to the economic slow down on the business front. Shri Agarwal said that when there is no business for traders and businessmen, then unemployment among labour was a natural consequence. He said that a business centre like Chandni Chowk was facing acute lack of work and business.

Shri Arvinder Singh Lovely, addressing an Aakrosh Rally and dharna at Krishna Nagar in East Delhi in which thousands of Congress workers and local people participated, said that the unemployment situation in Delhi was very scary, and poor people are leaving the Capital due to no work. He said that the biggest ready- made cloth market in Asia like Gandhi Nagar was facing very low business as people have no money to buy clothes. Shri Lovely charged the Modi Government for ruining the lives of the common people as small savings of the poor people were also brought under the category of black money during demonetization to do gross injustice to the poor. He said that people from all strata of society are against the BJP, and they will teach the Modi Government a befitting lesson when the time comes. 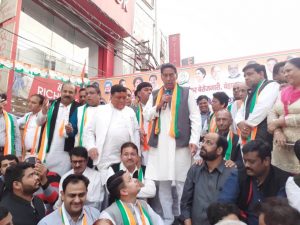