New Delhi: In a nationwide campaign being run by the Confederation of All India Traders (CAIT) against Amazon and Flipkart for distorting e-commerce and retail market of the Country, the CAIT today protested in more than 500 districts and in about 300 cities by holding Protest March and while submitting memorandum to the District Collectors in the name of Prime Minister, demanded the government that Amazon and Flipkart are second version of East India Company and as such should immediately be stopped for conducing business. The Protest March held across the Country were participated by around 10 lakh traders.

CAIT National President Mr. BC Bhartia and Secretary General Mr. Praveen Khandelwal termed unethical trade practices of Amazon and Flipkart in e-commerce as an ” economic epidemic” and said that if these companies are not stopped from their own arbitrariness then future of trade in the Country is very dark as more foreign Companies will do business in India with similar practices and the e commerce and retail trade having an annual turnover of more than Rs.45 lakh crore will be hijacked and monopolised in very few hands.They said that Amazon and Flipkart are acting as the second version of the East India Company, which needs to be stopped immediately in the larger interest of trade, economy and the Country.

Mr. Bhartia and Mr. Khandelwal said that it is a matter of great regret that gross violation of FDI policy by these two companies, selling goods at less than cost, giving huge discounts, influencing the prices in the market, creating an uneven level playing market and other unethical business practices, selling exclusive products on these portals, causing huge loss of revenue to the government, etc. are very serious in nature. The traders are astonished to see that even after complaining at all levels with supportive evidences, no action has been taken against these Companies so far which is matter of grave concern.

Both trade leaders said that it has been more than two weeks when a petition was filed in the Competition Commission, but no hearing has been done in the case yet. Traders across the country are unable to understand why leniency is being levelled against these companies. Does the country have separate laws for them and separate laws for traders? If inadvertently even a mistake is made by any trader, then all the departments immediately take action against the trader, but these companies are constantly being spared . Reserve Bank of India, Enforcement Directorate, GST Department, Income Tax Department and others are completely muted.

CAIT has urged the government to take immediate action on this matter and prevent the country’s retail market and e-commerce from becoming hostages of these two companies. Continuing the nationwide agitation now on 2 December, there will be a Traders rally in the capitals of all the states of the country and a memorandum will be given to all Chief Ministers. 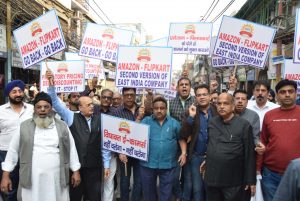 DREAM MATTRESS ROPES IN URVASHI RAUTELA AS ITS BRAND AMBASSADOR