New Delhi: Arun Singh the senior BJP leader who is the new face in Rajya Sabha has is getting huge support.

BJP leader from South Delhi, Suraj Chauhan met him and congratulated him for his appointment.

Suraj Chauhan said that Arun Singh is a man of his words and he believes that he will raise the voice of poor and needy in Parliament.

“He is our inspiration and a great leader. We have seen him working. I am delighted that he gave us time. We have felicitated him and have wished him great success,” said Mr Chauhan. 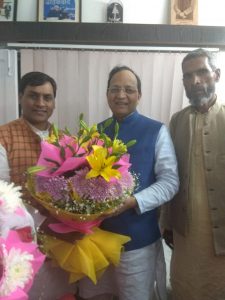 Suraj Chauhan is a known BJP face in Delhi. He is very active in South Delhi and works for the poor and needy.