New Delhi:
Delhi Pradesh Congress Committee president Shri Subhash Chopra, making a frontal attack on the Modi Government at the Centre for the free fall of the economic growth, and collapse of the economy in every field, said that the present economic plight has created despair and insecurity among the people. He said that the slide of economic growth to 4.5 per cent was a matter of great concern for the people. 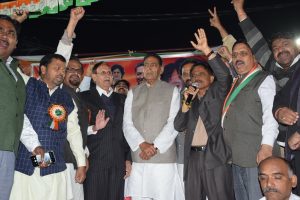 Addressing a Jan Aakrosh Rally at Masjid Road, Sultanpuri, in North West Delhi today, Shri Subhash Chopra said that the drastic fall in the economic growth was due to the wrong policies of the Modi Government, which included demonetization and the high rate of GST. Shri Chopra also criticized the Modi Government and the Kejriwal Government in Delhi on the issue of unauthorized colonies. The rally was presided over by former area MLA Jaikishan. Ex-MP Shri Ramesh Kumar and chief spokesperson Shri Mukesh Sharma also addressed the Aakrosh Rally. A large number of people from the minority community, street vendors and the poor, caught in the vicious grip of the economic ruin, also participated in the rally.

Shri Ramesh Kumar and Shri Jaikishan said that those living in the resettlement colonies of Delhi are struggling to eke out a living. They said that due to the economic slump, lakhs of people who were doing small-scale works from their homes, have been rendered jobless. They accused the BJP of being anti-poor, as they were working only for the benefit of the 5 per cent big industrialists in the country. Shri Kumar and Shri Jaikishan, slamming the Modi and Kejriwal Governments, said that due to unemployment, educated young people were being drawn to the field of crime.

Shri Mukesh Sharma announced that the Delhi Congress will intensify its dharnas and demonstrations against economic slump. He said that an Aakrosh Rally will be held tomorrow, Sunday, 1 December, at Bawana in North West Delhi in which a large number of labour and farmers will participate. Shri Sharma said that Delhi has been affected the most due to the distress in the economic sector as the households are struggling to keep the home fire burning.