New Delhi: Taking the help of social media, BJP Delhi Pradesh President Shri Manoj Tiwari has held the Kejriwal Government responsible for the bad shape of roads in Kirari and said that the Chief Minister remained in deep slumber for the last 57 months and tried to cover up his failures through costly advertisements and also affixed big hoardings with his photos five times in the name of Congratulations Kirari. The Government made big claims on the condition of roads but the ground reality of the roads in Kirari is that the local people are living in hellish conditions and the damaged roads are explaining the sufferings of the people. It is very difficult to say whether the roads are in the potholes or potholes are in the roads. The local MLA alongwith the Chief Minister are fully responsible for such condition in Kirari.

Shri Tiwari raised a question to Kejriwal that what is the fault of the people living in hellish conditions. People had given him a massive mandate but he betrayed the people by failing to fulfill the promises. The condition of roads not only in Kirari but in entire Delhi, is so bad that it is very difficult to walk. There are big potholes in the unauthorized colonies due to which accidents takes place but the Chief Minister is not concerned about it.

Shri Tiwari said that BJP has done what it had promised and now is the turn of roads in Delhi. After coming to power, BJP will reconstruct the damaged roads. BJP is responsible to the people and we will work to win the confidence of the people even if others don’t do so. All the MPs of Delhi are working day and night for Delhi but Chief Minister is not cooperating due to which only the people are suffering. With the will power and cooperation of the people of Delhi, Delhi BJP will connect Delhi with the mainstream of development.

Shri Tiwari also said that the purpose of politics should be the welfare of human beings but the Kejriwal Government is only working for the welfare of the people connected with Aam Aadmi Party and not for the human welfare. It is wrong to deprive the people of their rights by speaking lies. The silence of the people does not mean that they don’t want to tell anything. They have already shown their acrimony against Aam Aadmi Party in the Corporation and Loksabha Elections and again Kejriwal should be ready to face the consequences who is responsible for the sufferings of the people in Delhi. 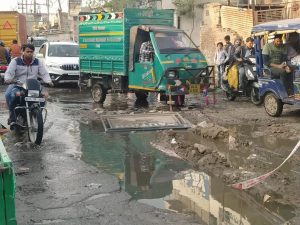