New Delhi: Delhi Pradesh Congress Committee president Shri Subhash Chopra has nominated Shri Kuldeep Bhandari as chairman of the Parvatiya Cell to expand the activities of the Cell and further strengthen the organization.

Shri Chopra has also nominated Shri Vishal Kundra as State Co-ordinator of the Social Media and IT Department to give wide coverage to the party’s activities in the social media.

Former DPCC president Shri Arvinder Singh Lovely, welcoming both the appointments, said that it will strengthen the party organization. He thanked Shri Subhash Chopra for these appointments.

Chief spokesperson Shri Mukesh Sharma said that DPCC president Shri Subhash Chopra gave the appointment letter to these two new nominees in the presence of a large number of party workers. He said that under the leadership of Shri Subhash Chopra, Delhi Congress was getting massive support from all sections of people. He said that the Pradesh Congress was all set to mount an aggressive campaign on the social media to expose the lies and falsehood of both the BJP and Aam Aadmi Party. 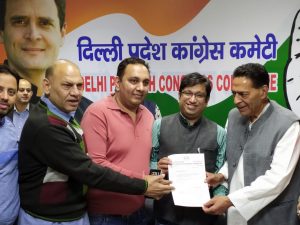