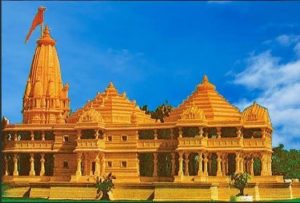 New Delhi, November 10, 2019 – Following the historic verdict delivered by the Hon’ble Supreme Court of India in the Ram Janma Bhumi case, a special meeting of the central office bearers of Vishva Hindu Parishad was held at the VHP headquarters in New Delhi today in which, satisfaction was expressed on the judgement of the Hon’ble Supreme Court. In this meeting held under the chairmanship of Vishva Hindu Parishad Working President, Advocate shri Alok Kumar, gratitude was extended to all the revered saints, leading lights from various walks of life, historians, jurists, experts of Archaeological Survey of India whose untiring diligence helped the court of law in arriving at this judgement.

In this meeting, a resolution was passed saying that the revered sant-mahatmas have had a special role to play in all phases of the struggle going on since 1528 CE. It was verily the sant fraternity which initiated the current edition of the struggle. In the Dharma Sansad held in 1984, they were the ones who resolved to liberate the Sri Ram Janma Bhumi and entrusted the Vishva Hindu Parishad to shoulder the responsibility of this second biggest movement of independent Bharat. Since then till now, their blessings, guidance and cooperation have always been available in every phase and chapter of the movement. The whole Hindu society would remain thankful to them for leaving their monasteries, temples, ashrams and wandering for the cause from street to street and village to village! The success of the movement would not have been possible without this important role of the revered saints.

In this meeting, yesterday’s judgement of the Hon’ble Supreme Court was also analyzed. In the implementation of this verdict, the roles of the central government and the state government of Uttar Pradesh have also been determined. While expressing confidence that these governments are alert and active towards their responsibilities, they were also requested to take prompt action.