New Delhi: The Confederation of All India Traders (CAIT) while expressing its concern on the continuation of unethical & unfair business practices of e commerce Companies prominently Amazon & Flipkart despite of FDI policy in place and several repeated warnings of the Government has mooted a suggestion of introduction of ” Minimum Operative Price (MOP) in a communication sent to Union Commerce Minister Shri Piyush Goyal today.

CAIT National President Mr. B.C.Bhartia & Secretary General Mr. Praveen Khandelwal said that more than 7 crore small businesses in the Country are now at loggerhead and feeling highly disappointed as the onslaughts of these e commerce companies are still continuing irrespective of several stern warning issued by your good self and in a clandestine manner the e commerce companies are indulging into predatory pricing and deep discounting. The sanctity of the FDI policy has been greatly tarnished which reflects their scant respect for the policy and mandate of the Government. It is a situation of utter dismay that Brand owning Companies are also hand in glove with these Companies and in utter disrespect to their supply chain of Distributors and Retailers who have invested high stake in their products are offering goods to these Companies at a much lower price than what is being given to supply chain stakeholders. It is further disappointed that several Banks are also involved in this nexus by offering various cash back schemes exclusively to online sales.In this way brands & e commerce companies and banks create a mechanism to lower down the prices than the actual market value and causing high level of GST and other revenue loss to the Government

The traders across Country are of the considered opinion that if these Companies are allowed to continue the business in their present modal, the days are not far away when they will emerge as second edition of East India Company which will not only be detrimental to retail trade but will also prove a dangerous situation for economy of the Country-said both the trade leaders.

In its communication to Shri Goyal, the CAIT said that under the circumstances and visualising it as a Price War, ” we suggest that it is the high time when Government must step in and enforce the fundamental of ” Minimum Operating Price”(MOP) which is the price consisting of landing price, operational cost and reasonable profit margin and below the MOP no product should be sold in the market” .It is the responsibility of the Brands to advise to their buyers to sell their products at MOP to maintain the market hygiene keeping in mind that retailer should earn at least minimum margin to cover his operational cost and earn very thin margin.

The CAIT further said that there should be a uniform policy of discounting by Brands both for online and offline trade. Cash back on credit cards given by the Banks should also be made applicable to offline trade. There should not be any kind of exclusivity either for online or offline trade.Upgrade or buyback offer by Brands should remain the same for both offline and online trade. All schemes of the Brands should be made available to online and offline trade in transparent manner. It will create an even level playing field for every player in retail trade which will encourage fair competition in both offline and online business.

Both Mr. Bhartia and Mr. Khandelwal urged Shri Goyal to initiate a discussion with all stakeholders on MOP and frame rules for the same and also demanded that the Government should constitute a Regulatory Authority to regulate and monitor all verticals of retail trade including Small Retail, Big Retail, E Commerce & Direct Selling. Beside MOP, if anyone is desirous to offer any scheme, the same should invariably be approved by the Regulatory Authority. The cash on delivery (COD) in e commerce should not be allowed and all deliveries in online sale should accept digital payments only. 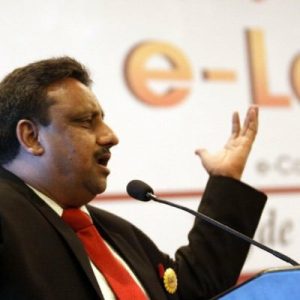 DLF The Ultima welcomes this winter with the Kid`s Carnival