New Delhi: Under the leadership of Delhi Pradesh Congress Committee president Shri Subhash Chopra, thousands of Congress workers and the general public held a massive demonstration outside the Delhi Jal Board pumping station, opposite the Ramlila ground, Turkman Gate (Old Delhi) today, to protest against the contaminated water being supplied by the Delhi Jal Board, headed by Delhi Chief Chief Minister Arvind Kejriwal. Shri Subhash Chopra and the Congress workers wore garlands made of bottles with contaminated water.

Shri Subhash Chopra, addressing the demonstrators, demanded that a criminal case should be registered against Delhi Chief Minister Arvind Kejriwal as the AamAadmi Party Government was playing with the lives of Delhiites. He said that the AAP Government has totally failed to supply clean drinking water and clean air to the people of Delhi. Shri Chopra said that after Kejriwal came to power in Delhi five years ago, 22,57.298 people have been affected by cholera and 18,010 people suffered diarrohea. He said that the undrinkable water, and the highly polluted air, have put the people’s lives on the edge as Delhiites are now not only battling with water-born diseases, but also highly toxic air, which was causing lung diseases.

Shri Chopra said that hospitals in the Capital are struggling to treat the long queues of patients outside the hospitals. He said that the poor people have been weighed down by a double whammy, as not only soaring prices of essential commodities, but also contaminated water and polluted air, have broken their backs. Shri Subhash Chopra said that the Kejriwal Government was surviving on lies and falsehood through media advertisements, instead of addressing the problems affecting the people. He said that the common people are being slow-poisoned by the contaminated water and air pollution.

Shri Subhash Chopra, Shri Jai Prakash Agarwal, Shri Arvinder Singh Lovely and Shri Kirti Azad said that the Congress party will fight for the rights of the people of Delhi without sparing any effort. They said that the BJP has no moral right to raise the water and pollution issue as the BJP Government was equally responsible for the water and air pollution crises. They said that the Kejriwal Government was not only adopting a lazy approach towards the problems of the people, but it was also wasting time in telling lies, false propaganda and in vitiating the social atmosphere. Shri Chopra demanded the resignation of Arvind Kejriwal as the chairman of the Delhi Jal Board. 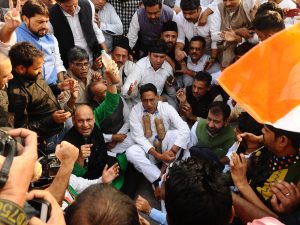