New Delhi:
In response to the call of Confederation of All India Traders (CAIT) for a nationwide protest against unethical and unfair business practices of Amazon & Flipkart, trade associations across country today observed ” National Protest Day” and hold a series of Protest Dharna in more than 700 cities of different States which were attended by lakhs of traders. The demonstrating traders strongly said that India’s e-commerce market has been made highly toxic by Amazon and Flipkart with their unethical trade practices and openly violating the government’s FDI policy.It has created an uneven level playing field in e commerce market and has greatly damaged the domestic trade of the Country. The protestors demanded the Government to impose immediate ban on ecommerce portals of both Amazon & Flipkart.

The series of Protest Dharna today was led by a massive Dharna at one of the prominent market of Delhi, Sadar Bazar where large number of traders gathered from different parts of Delhi and NCR expressing their strong anger said that unethical and unhealthy trading practices of Amazon and Flipkart are moving towards enslaving the country’s retail trade which will have an adverse impact on Indian economy as well. The CAIT reaffirmed that traders of Delhi and the Country are committed for not happening of any more economic slavery once again and will do everything in their might to protect the domestic trade from onslaughts of e commerce companies.At protest, the traders were holding placards showing “Amazon-Fliokart GO Back” and asking the Government to block e portals of Amazon & Flipkart.. Prominent leaders of transport, small Industry, hawkers, consumers and other sections were also present at the Dharna lending their support to the nationwide agitation of CAIT.

Mr. BC Bhartia, National President of CAIT and its Secretary General Mr. Praveen Khandelwal said that traders of the country have no objection to Amazon and Flipkart conducting business in India, but like merchants, Amazon and Flipkart have also to follow every provision of FDI policy of the Government and other tax laws so that an equal competition in the e commerce market should remain. They deeply regretted that despite the strict warnings of the Union Commerce Minister at various national & International forums, both Amazon and Flipkart severely devastating the eco system of e commerce trade in India. 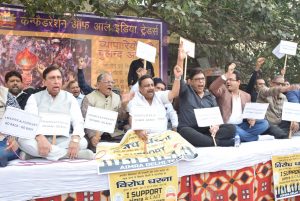 Mayur Festival will be held on 24 and 25