The 72 hour long hunger strike which started from Thursday, 21st November, 2019, 4 p.m. by Delhi State, Senior B.J.P. Leader and former M.L.A. Shri Karan Singh Tanwar against Delhi Chief minister Shri Arvind Kejriwal and AAP M.L.A. from Delhi Cantt. Surender Singh, concluded today evening, the fourth day after 72 hours. This strike was done against non-implementation of number of beneficiary schemes of honourable prime minister Shri Narendra Modi such as ‘Aayushman Bharat Yojna’, ’Pradhanmantri Awaas Yojna’ in Delhi by AAP chief minister Arvind Kejriwal and against AAP M.L.A. from Delhi Cantt. Surender Singh, for his number of misdeeds such as, being missing from the area throughout his tenure of 5 years, working in the spirit of retaliation and doing sealing & sabotage in Delhi Cantonment area by pressurising officers.

Shri Tanwar’s fast was ended by Vice President of Bharatiya Janata Party, All India and in-charge of Delhi, Honorable Shri Shyam Jaju Ji. Shri Shyam Jaju said that BJP has such a hardworking and struggling leader who is capable of accomplishing extreme difficult tasks like sitting on the road, starving & fasting for 72 hours for the people of Delhi and a person like him only is capable of implementing the schemes of Honorable Prime Minister.

Shri Tanwar expressed his heartfelt gratitude to Shri Shyam Jaju ji, all the hard working BJP workers and the local people for their day and night participation on the dharna, and said that in order to live up to the expectations of the people of my area and the BJP, he is ready to shed each strand of his blood.

On this day, Mr. Arun Singh Dhadwal, a former councilor of Delhi Cantonment Board’s Congress Party, impressed with Prime Minister Narendra Modi’s working style and Mr. Tanwar, joined BJP with his many supporters in the presence of Mr. Shyam Jaju. 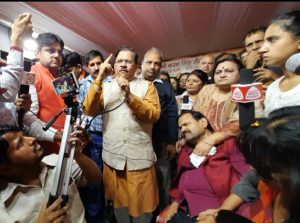