New Delhi: Delhi Pradesh Congress Committee president Shri Subhash Chopra today addressed three major Aakrosh Rallies in the North East and East Delhi Parliamentary constituencies as part of the Delhi Congress’ third phase of the Halla Bol rally, holding the Modi Government at the Centre responsible for the scary unemployment scene in the country, financial slump and the crisis in the farm sector. Shri Chopra, addressing Aakrosh rallies at the Babarpur Bus Terminal in the Babarpur district, the Gokulpuri Chowk in the Karawal Nagar district and the Bhogal Central Road in the Patparganj district, said that the country’s present plight was on account of demonetization and the higher rate of GST, which has ruined the financial health of the country.

Shri Arvinder Singh Lovely said that the Modi Government’s stand that “Na Khaunga, Na Khane Dunga” has become a big joke and a hollow promise. He said that the truth is that during the BJP rule, BJP people have looted public money with both the hands. Shri Lovely reminded that when former Prime Minister Smt. Indira Gandhi nationalized the banks, she opened the doors of the banks to the common people. But the Modi Government has opened the cash chest for the rich and the powerful to rob the bank funds and scoot. He said that this was the prime reason for the economic ruin in the country.

Ex MP Shri Parvez Hashmi and Ex MLA Ch. Mateen Ahmed said that the Modi Government’s dream of taking the country to a 5 trillion dollar economy was yet another ‘jumla’ to fool the people. They said that not only the poor people who are the worst affected by the economic slump, but also the middle class and the farmers. They said that following demonetization, Modi’s rich friends became richer while the common people were pushed down the dumps. They said that the Modi Government was trying to fill the stomachs of the common people with ‘jumlas’ instead of shoring up the economy. 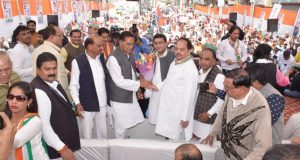