New Delhi: Delhi Pradesh Congress Committee president Shri Subhash Chopra slammed Prime Minister Narendra Modi on demonetisation and its adverse effects on women, adding that Modi has robbed the mothers, sisters and daughters of the country of their ‘secret’ savings that they had saved painstakingly over the years from their household budgets. He said that these personal savings not only gave them a sense of empowerment but also used in case of any family emergency. Shri Chopra said that Shri Modi did ‘anyaya’–injustice– with crores of women in India. Shri Chopra said that to counter this injustice, former Congress President Shri Rahul Gandhiji declared ‘Nyaya’ scheme in Congress’ 2019 manifesto. He said that under the ‘Nyaya’ scheme, the eldest woman members from BPL families would be given Rs. 72,000 per year (Rs. 6000 per month) to augment family income. Shri Chopra said that the money that Shri Modi robbed from poor women, Congress would have given it back to them. Shri Chopra declared that if Congress forms Govt in Delhi, “we would implement ‘Nyaya’ scheme in Delhi”.

Shri Subhash Chopra also criticized the Modi and Kejriwal Governments on price rise and food inflation. He said that on the one hand there is less income due to unemployment, job retrenchment and overall depressed economic conditions while on the other hand, there’s unabated inflation. He said that the Modi Govt keeps on increasing excise duty on petrol and diesel, the Kejriwal Govt has increased VAT on the same twice and refuses to roll back.

Shri Subhash Chopra said that recently onion prices touched Rs. 100 per kilo, and food inflation is hitting every household. Shri Chopra said that women, who are primarily responsible to operate within a limited household budget, are the worst sufferers. He said that on the one hand, there’s less income due to economic crisis, on the other, there’s major inflation. He said that common people are getting more and more oppressed due to utter incompetence, lack of vision and indifference of the Modi and Kejriwal Governments.

Ms. Sharmistha Mukherjee said that due to rising crime against women in Delhi, the Capital of India has come to be known as the ‘rape capital’. Ms. Mukherjee said that in 2012, when the Nirbhaya incident happened, Shri Arvind Kejriwal sat with the demonstrators with a candle. Today, even if you search with a halogen light, he is nowhere to be seen and is absolutely silent as far as the issue of women safety is concerned. She said that under the chiefministership of Kejriwal, crime against women has been constantly rising. She said that in 2012, the number of rapes in Delhi was 706. Now it’s 1877 as on 31st Oct 2019- an increase of 165.86 per cent. Ms. Sharmistha Mukherjee said that there is an average of 6 rapes per day in the capital. Snatching has become a commonplace hazard which people of Delhi are being subjected to everyday, and 90% of the victims are women.

Ms. Mukherjee said that the Modi Government’s pet scheme Beti Bachao Beti Padhao is nothing but a hoax. She said that out of the Rs 928 crore budget allocated so far from the scheme since 2015, only 19% of it has been sent to districts and States for the actual beneficiaries whereas 40% of it has been spent on advertisements.

Shri Jai Prakash Agarwal slammed both Kejriwal and Modi Govts saying both Modi and Kejriwal Govt spend 1000s of crores on advertisements and one can see their smiling faces on large hoardings everywhere, but nowhere you see that in any of these hoardings there is any attempt to spread legal awareness to potential criminals who need to be made aware of the stringent laws. He asked what has happened to fast track courts that Shri. Kejriwal had promised to set up? Not a single fast track court has been set up in the last 5 years.

Shri Mukesh Sharma, Chief Spokesperson and senior leader questioned the qualifications and procedures for appointing 13,000 marshals in buses as claimed by Shri Kejriwal. Shri Sharma said that these people are not from home-guards. What qualification they have to be employed as security marshals for buses? He also asked Kejriwal how these people were appointed. There was no public notification, advertisement on newspapers declaring the intention of the govt to employ these people. He said that no proper procedures were followed. Shri Sharma said that this is a big scam through which only AAP workers were employed, depriving lakhs of ordinary youth of Delhi of employment opportunity. Shri Sharma said that these marshals are nothing but publicity agent of AAP who are employed with tax payers’ money to do publicity of for the AAP Govt in public buses. He demanded that a thorough investigation be done to probe the scam. 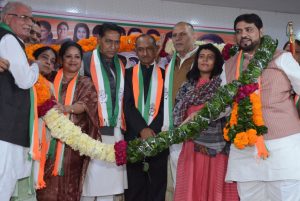