New Delhi: Holding the Modi Government responsible for making a mockery of the Constitution and democratic traditions to hoist a BJP Government, headed by Devandra Fadnavis in Maharashtra without people’s mandate, thousands of Congress workers, under the leadership of Delhi Pradesh Congress Committee president Shri Subhash Chopra, held a massive demonstration and gheraoed the BJP Headquarters at DDU Marg, New Delhi.

When the angry Congress workers, under the leadership of Shri Subhash Chopra, tried to break the police barricade to enter the BJP headquarters, the heavy police security, while trying to block the demonstrators, clashed with them. The large police forced requested Shri Subhash Chopra to control the situation, and Shri Chopra appealed to the demonstrators not to turn violent which calmed them down. Para-military and anti-riot police were also present in large numbers to control the surging Congress demonstrators towards the BJP office.

Addressing the demonstrators, Shri Subhash Chopra said that the Modi Government has not only murdered democracy, but also disregarded the Constitution to foist an undemocratic BJP Government in Maharashtra. He said that it was for the first time in the history that President’s rule was lifted at 5.15 a.m and the Chief Minister and the Deputy Chief Minister were swornin at 5.37 a.m with the entire drama lasting barely 22 minutes. Shri Chopra said that this will be considered as the darkest day in the annals of democracy to overturn the people’s mandate to swear in a Government without a majority. He said that the Congress party will strongly protest the murder of democracy from streets to the Parliament House. Shri Chopra charged that the BJP Government was not only misusing Government agencies to put pressure on the MLAs, but also threatening to implicate them in false cases if they did not fall in line.

Shri Subhash Chopra said that thousands of Congress workers assembled at the DPCC at a short notice of just two hours to gherao the BJP headquarters on DDU Marg which showed that people are very angry with the Modi Government’s black deeds to throttle democracy and make a mockery of the Constitution of the country. He said that the people of the country want to save democracy and democratic traditions at any cost. Shri Chopra stated that people are now forced to think that the election process in the country would be done away with. He said that democracy was not in safe hands now.

Shri Jai Prakash Agarwal and Shri Arvinder Singh Lovely said that the BJP, which is trying to impose an autocratic rule in the country, was not only misusing Government machinery and authorities, but also indulging in Government goondaism, to create an anarchic situation in the country. They alleged that the BJP, in their hunger for power, was willing to go to any extent to create a fear psychosis among the people to capture power, and that is what has happened in Maharashtra. They said that Congress is the only party which has always respected people’s verdict, and demanded the immediate resignation of Maharashtra Chief Minister Devendra Fadnavis and Deputy Chief Minister Ajit Pawar. 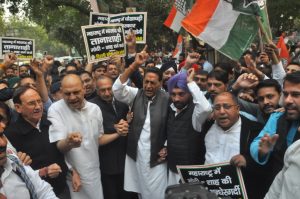