Addressing the people present on this occasion, National Vice President and Delhi Incharge Shri Shyam Jaju said that Delhi is the capital of the country and people from all the states come here in search of their livelihood. Everybody dreams of having his own house and always tries to get a house for himself. They purchase small piece of land with the help of their hard earned money and construct a house for themselves and these houses have taken shape of unauthorised colonies. The Congress Government took political advantage of terming these colonies as unauthorised and always tried to keep their regularisation pending. The Congress Party and after that the Aam Aadmi Party mislead the people by speaking lies and tried to won their trust and vote. When the time came for fulfilling the promises they said that they wanted to fulfil their promises but they are not being allowed to do so. Prime Minister Shri Narender Modi demolished all these falsehood and w.e.f. 16th December, the registration for the houses of the people living in all the unauthorised colonies will be started.

Exposing the falsehood of the Aam Aadmi Party, Delhi BJP President Shri Manoj Tiwari said that the people of Delhi had reposed faith in Aam Aadmi Party but even after 57 months of its tenure, the Kejriwal Government has not worked for the people of Delhi. If Kejriwal wanted, then he could have regularised these colonies long ago but actually he did not want to do so. Three years ago when I became the President of Delhi BJP and started reaching among the people then everyone wanted that the unauthorised colonies be regularised somehow. All the MPs of Delhi started working on it but Kejriwal became a hurdle in our effort. The people of Delhi must remember that people work after winning elections, but BJP is fulfilling its promises before the elections. Shortly, Delhi BJP will issue its election manifesto in which it will be mentioned that what are the further plans of BJP regarding Delhi. At present there is a Government in Delhi which claims about free water supply but actually it has failed in supplying potable drinking water and as a result the numbers of patients suffering from water borne diseases are increasing in the hospitals. The Chief Minister used insulting words for the people of Poorvanchal when he said that these people come to Delhi by getting a ticket of Rs. 500 and return after getting treatment of lakhs. BJP does what it says and we have shown that what appeared to be impossible is now possible. Article 370 and 35 A, giving special status to Kashmir was abolished. The historic decision on Ram Janm Bhumi was pronounced and the people of Delhi living in unauthorised colonies have been conferred ownership rights. Now, BJP will work to supply clean drinking water through taps to every house of Delhi. 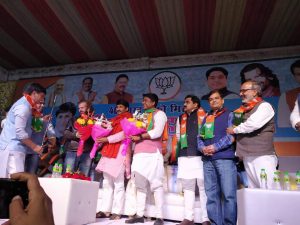 MP Shri Pravesh Verma said that millions of people living in unauthorized colonies used to believe that there will be someone who will listen to them. The Congress and the Aam Aadmi Party betrayed them, but in 2014, they ensured victory for all seven MP candidates of Delhi becuase the people who strengthened the hands of Prime Minister Shri Narendra Modi and reposed faith in BJP. That same belief of the people gave strength to Modi ji and in 2014 itself the biggest obstacle in regularizing unauthorized colonies was the Kejriwal Government of Delhi, who confused the people by avoiding demarcation and said that we are working but the Central Government is not allowing us to work. Modi ji has done the task of solving the biggest problem of Delhi within 100 days for which he must be thanked.

MP Shri Hansraj Hans said that Prime Minister Shri Narendra Modi is concerned about every citizen of the country. While Delhi enjoys the status of the capital on one side and has the highest temple of the democracy the Parliament building with high-rise buildings, on the other hand, in unauthorized colonies, the people were forced to live in hellish conditions. Modi ji understood the pain of the people living in these colonies and took such a historic decision to give ownership rights of their house to heads of millions of people within just 100 days, which wiped out the stamp of unauthorized from the head of millions of people.

Program Coordinator and Delhi Pradesh General Secretary Shri Kuljeet Singh Chahal said that the sword of unauthorized was hovering over the head of millions of people, there was always an atmosphere of fear among the people which is now turned away by the will of Prime Minister Shri Narendra Modi’s decision. Delhi believed in Modi ji and the people punctured the deceit of Congress and Aam Aadmi Party with the help of their faith in Modi ji.

Locust control operations have been done in more than 5.66 lakh hectares area in 10 States till now