Addressing the protesters, Pradesh Secretary Shri Gajendra Yadav said that in the 58 month tenure of the Chief Minister, only the public has been disappointed because not a single election promise was fulfilled, but the Chief Minister tried to fix his image through expensive advertisements among the people but failed due to sharp eyes of public. The people understand the lies being spread by the Chief Minister and will surely give a proper answer in the Assembly elections.

Pradesh Secretary Vikram Bidhuri said that the people of Delhi feel themselves to be cheated due to failure of Kejriwal’s policies. Everyone has right to get clean water and air but due to the politics of accusing others by the Chief Minister, people are unable to get it.

President of Kisan Morcha Shri Mukesh Maan said that the Kejriwal government has failed completely to work according to the hopes and aspirations of the people, failed to provide clean air, clean water, there is anger among the farmers against a government which places its interests paramount over the interests of Delhi. The Kisan Morcha has raised its voice against the injustice being done to the public from time to time.

President of Mahila Morcha Smt. Poonam Parashar Jha said that the Kejriwal government has never been serious about the safety of women. The ministers and MLAs of Aam Aadmi Party have also been openly insulting women from time to time, but the Chief Minister has not taken any action against them till date. It clearly shows that the party workers who insult women have full protection by the Chief Minister. 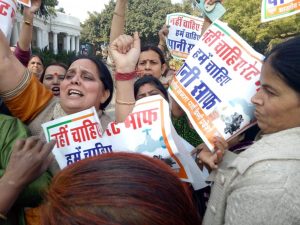